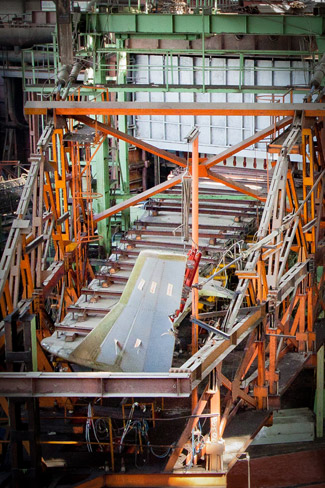 Specialists from the TsAGI strength department have completed residual strength tests on the IL-96. This work was the final stage in a large volume of research carried out on the aircraft, which included service life tests and survivability tests. The experiments were carried out on a model of the IL-96-300 given the need to optimize the increased service life characteristics of a modification of this aircraft — the IL-96-400T. The work was carried out on behalf of JSC Ilyushin Aviation Complex.

At the first stage of residual strength tests, the scientists tested the plane’s wing. The strength components of the wing were subjected to regulated damage at critical levels, and then maximum (operational) loads were applied. The second stage involved testing the fuselage of the aircraft. The cover of the fuselage was cut longitudinally between three adjacent frames. At the same time, the middle frame was cut. Then the fuselage was filled with air to an excess pressure of 0.72 atm, which is 15% higher than the operating level. Both stages were successful; the damage to the construction withstood all the forces applied.

“Thereby, the service life work on the IL-96 has come to an end. The entire cycle of damage testing showed the aircraft structure to have a high level of excellence from the point of view of service life, survivability and residual strength. We have received unique results, which make it possible for the entire fleet of IL-96 to operate in excess of the planned service life. The tests carried out have again confirmed that the airframe and chassis of the IL-96 comply with the highest world standards. Without exaggeration, this aircraft represents the pinnacle of domestic aviation,” Konstantin Scherban, Deputy Director of the TsAGI Aircraft Structure Service Life Research Department, said.