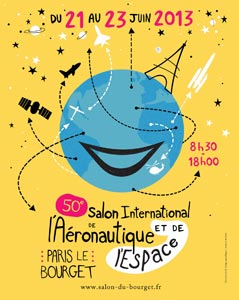 From June 17th to 21st, 2013, a delegation from the Central Aerohydrodynamics Institute headed by General Director B.S. Aleshin visited the 50th International Le Bourget Airshow in Paris. Representatives of the center of Russian aviation science familiarized themselves with the exposition and conducted a series of scientific and business meetings.

The General Director of TsAGI, Boris Aleshin, spoke at a conference organized by the Skolkovo Institute of Science and Technology (Skoltech) and dedicated to its primary projects. They include work in the field of new materials, in which the TsAGI National Composite Center is Involved.

Furthermore, representatives of TsAGI participated in TsAGI’s 12th International Seminar, ONERA, which is held in a suburb of Paris, Palaiseau, where one of the French aviation center’s three laboratories is located. Work was organized into three sections, Buffet Study, Questions of Airframe Noise, Gas Turbine Motors and Open Rotors. All of the issues touched upon were concentrated around joint Russian-European projects in the 7th Framework Program. After the seminar, a tour of the ONERA experimental facilities was conducted.

At a meeting with the technical director of the EADS company, Mr. Jean Botti, the prospects for the creation of a non-destructive testing center in Zhukovski with the help of TsAGI were discussed. The Center must by accredited by the Airbus Company, which will make it possible to provide services to foreign clients. This discussion also touched on the creation of a joint TsAGI-EADS enterprise, which will handle the problems of monitoring the condition of aeronautical structures with the help of thermography.

Negotiations were conducted between the management of TsAGI and the Austrian company Diamond Aircraft Industries on the question of joint research in the area applying new technologies to the production of composite materials and structures, as well as engine building.

Finally, the institute’s scientists conducted a meeting with representatives of the European Commission and discussed the prospects for cooperation within the framework of European programs such as Clean Sky 2, Horizon 2020, etc.

“An event as significant for the world aviation industry and the jubilee 50th Paris air show at Le Bourget provided TsAGI with unique opportunities to develop existing contacts with foreign partners from around the world, as well as build new ones,” noted the Executive Director of TsAGI, Sergei Chernyshev.