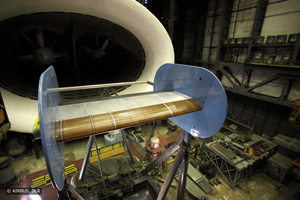 The results have been summed up in the SADE (SmArt High Lift DEvices for Next Generation Wing) project, as part of the European Union’s 7th Framework Programme, dedicated to researching “smart” elements for mechanizing next generation wings.

TsAGI, the only Russian institute to take part in this project, was the coordinating organization for a range of work connected with theoretical and experimental research on a number of concepts for adaptive control mechanisms.

About a hundred of the Institute’s employees took part in designing, engineering and building the large-scale model, designed to be tested in the T-101 subsonic wind tunnel. The wing of the demonstrator is fitted with a three-section seamless leading edge (German partners — DLR and EADS), and also with a one-section single-slotted flap (Italian partners — PAI).

Specialists from the TsAGI technical research centre and experimental production unit performed significant work. Theoretical support for the project as well as the preparation and conducting of stiffness and frequency testing was provided by a team of specialists from the Institute’s department for strength standards and static and heat resistance.

Testing of the demonstrator in the wind tunnel (under the management and with the participation of specialists from the department of propulsion unit aerodynamics, aircraft and rocket aerodynamics, instrumentation and metrology) was preceded by significant preparation work by the Institute’s European partners. Twelve other leading European aviation scientific and design centres worked on the project along with TsAGI, including the German Aerospace Centre (DLR, Germany), Delft University of Technology (TU Delft, The Netherlands), Aerospace Research and Test Establishment (VZLU, the Czech Republic), Swedish Defence Research Agency (FOI, Sweden), the Italian Aerospace Research Centre (CIRA, Italy), Airbus Operations GmbH (Airbus, Germany), European Aeronautic Defence and Space Company (EADS, Germany), the Aircraft Research Association (ARA, UK) and others.

“The activities of our scientists, engineers and workers on the SADE project was highly valued by the Project Director Hans-Peter Monner (DLR), the Curator of the project on behalf of the European Commission Pablo Perez-Illana and also all TsAGI’s European partners," said TsAGI scientific director for the SADE project Doctor Gennady Amiryants. "Far from all the issues connected with creating adaptive mechanisation elements have been resolved so far, but important progress has been made in a promising direction. The significantly modernised SADE demonstrator will be used in the next EU 7th Framework Programme project.”