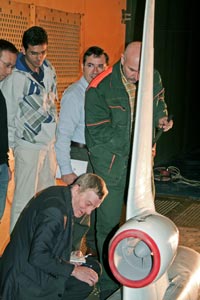 TsAGI’s Strength Complex experts have completed the tests of a multifunctional aeroelastic model of high aspect ratio wing for advanced passenger carriers. The work was performed as part of cooperation with Embraer (Brazil). The experiments took place in T-128 transonic wind tunnel.

This model has been designed and manufactured by the scientists of TsAGI’s Department of Strength, Loads and Aeroelasticity, using the source data provided by Embraer. The structure of the model allows studying aeroelasticity properties for several wingtip versions, varying the pylon and center wing section rigidity, the aileron rotation frequency and the engine center of mass position. Inside the model, an inertial excitation system of elastic vibration has been installed, powered by a miniature electrohydraulic drive. Using this system, forced vibration has been generated on the model, both in airflow and without it.

The measuring system numbered over 110 channels of data logging. In the course of work, the deformation was measured of the wing and the main springs, accelerations (over 30 points, depending on configuration) and also non-stationary pressures in three airfoil sections (over 60 points). The model was intended for flutter behavior studies. Besides, the test program scope comprised the measurement of steady-state pressure field by means of pressure-sensitive paints (PSP).

In December 2012 and January 2013, a joint expert team of TsAGI and Embraer successfully completed the research program planned. Currently, the specialists of the two countries are analyzing and processing the data obtained.