TsAGI specialists are working on a new small aircraft 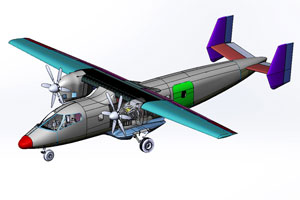 Specialists of the Central Aerohydrodynamic Institute named after Professor N.E.


Specialists of the Central Aerohydrodynamic Institute named after Professor N.E. Zhukovsky (TsAGI) have developed a technology platform (a set of interrelated technologies) for inexpensive light multipurpose aircraft (LMS) with extended basing capabilities. The platform can be used for creation of an advanced aircraft for 9, 13 and 19 passengers, which shall meet the requirements of the Russian small aircraft market and will be able to compete in the global arena. Work under the contract with the Ministry of Industry began in 2011.

TsAGI proposed a set of technical solutions in the field of aerodynamics, materials and structures, management systems,

providing a significant improvement in the technical level and consumer properties of the aircraft.

Scientists are working on the creation of the airframe made of polymer composite materials, automated LMS management system and wheel chassis in the base case, as well as on stand-alone air cushion landing system, the use of pressurized cabin, two turboprop helicopter motors connected with synchronization shaft, etc. Special attention is paid to the operation of LMS in non-airfield conditions, which is important for our country, especially in Siberia and the Far North regions.

The aerodynamic design has been developed, combining high aerodynamic efficiency at cruising flight mode with high lifting properties at takeoff and landing modes. The calculated aerodynamic properties have been confirmed by model testing in T-102 wind tunnel. Air cushion landing gear has been successfully tested in the tunnel and in the seaplane tank of the Moscow Complex of TsAGI.

According to estimates by FSUE “State Research Institute of Aviation”, if created, the light aircraft in wheeled chassis configuration will allow to reduce the cost of transportation by  as compared to An-2, L-410UVP-E as well as foreign peers. That gives grounds to consider LMS as a next-generation aircraft family. The economic efficiency of the light aircraft with air cushion landing gear will be positive as well.

According to experts of JSC “Aviaprom”, sales prospects of the new LMS from 2016 to 2030 could reach about 1770 aircraft of all three variants for the total amount of about 4.5 billion U.S. dollars. With that, the share of  version will be 62% of the total production volume, version will account for 25%, and version — 13%.

In general, studies have shown that if technical solutions and technologies developed by TsAGI are applied, new Russian aircraft will be able to compete in the domestic and foreign markets, and will ensure affordability and security of the local air transportation and aerial works.

“We consider it useful to create a plane to demonstrate the technology of light multi-purpose aircraft of the future, on which we can develop and test specific promising and innovative technical solutions. Our specialists already developed a preliminary design for the demonstrator in 2012, under a contract with the Russian Ministry of Industry and Trade,” the project’s head of research Andrey Dunaevsky said.