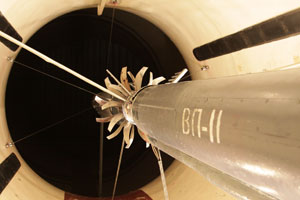 Aerodynamics, acoustics and durability experts of TsAGI have completed tests of a bi-rotary (coaxial) propfan model for future long-haul aircraft engines. The propfan design was developed by FSUE “CIAM” named after P.E. Baranov. The test model was manufactured at TsAGI and tested in wind tunnels T-104 and T-107. The work was carried out under the order of the Ministry of Industry and Trade of the Russian Federation.

The purpose of the tests was to investigate the aerodynamic and acoustic characteristics of the propfan in takeoff & landing and cruising flight modes at Mach numbers 0 — 0.8. Propfan operating modes were simulated at different flight and blade rotation speeds, similar to full-scale modes, as well as by changing the blade angles.