TsAGI and DAI signed a Memorandum of Understanding 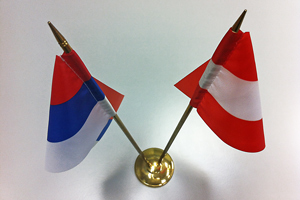 On November 28th the Central Aerohydrodynamic Institute named after N.E. Zhukovsky (TsAGI) and the Austrian company Diamond Aircraft Industries (DAI) signed a Memorandum of Understanding, setting out the main terms of cooperation in the field of aeronautics.

The scientific centers of Russia and Austria will work on the development of an advanced light aircraft for local airlines with a capacity of  The interests of TsAGI and DAI also include research, development, production technology, testing, certification and repair of structures made of composite materials (CM). Interaction points were found in the area of diesel aircraft engines, flight simulators, electric aircraft, and unmanned aerial vehicles (UAV). The joint efforts of the two organizations are aimed at the accomplishment of Russian and European objectives.

An agreement on cooperation between the companies was reached in October 2012 based on the results of the visit of a Russian delegation to the Austrian company. During a return visit of DAI to Russia in late November the abovementioned memorandum was signed.

Director General of TsAGI Boris Aleshin highly appreciated the meeting. He noted the need and promising prospects of research of CM structures, and the creation of a joint light aircraft project, including with account to the experience of DAI in development of the personal jet aircraft  and the potential of TsAGI in conceptual design and experience in the development of aircraft for various purposes.

In turn, the head of DAI Christian Leopold Dries thanked the Russian party for the warm welcome and expressed his hope for further fruitful and mutually beneficial cooperation

Diamond Aircraft Industries (DAI) is Europe’s largest designer and manufacturer of general aviation aircraft, motor gliders and unmanned aerial vehicles made of CM, as well as simulators and aircraft engines. DAI has experience of certification of CM structures in Europe and North America. In particular, it carries out research in the areas of development of an aircraft with electric or hybrid power plant and electric remote control system.