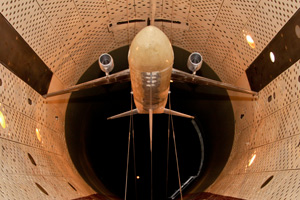 Specialists of the aerodynamics department of TsAGI tested the cruise configuration of the “Frigate Ecojet” aircraft model. The works were ordered by JSC “Russian Aviation Consortium.” The research was carried out in TsAGI’s transonic wind tunnel T-106.

Tests have shown that the developed aerodynamic design with load-bearing fuselage and wing of relatively high thickness ensured achievement of design cruising speeds with favorable bearing and torque characteristics behavior. The experiment demonstrated the ability to achieve the declared level of aerodynamic quality.

Data obtained during the experiment will be used for further design of the “Frigate Ecojet” aircraft.

Tests of the “Frigate Ecojet” model in TsAGI’s subsonic WT T-102 are scheduled for 2012. Aerodynamic specialists of TsAGI will have to determine characteristics during takeoff and landing in longitudinal and lateral channels, including ground effects.

The “Frigate Ecojet” aircraft represents a new generation of wide-body passenger aircrafts designed for operation on near-and medium-range routes (up to 4,500 km). The aircraft features fuselage geometry with a horizontal ellipse cross-section.

The search for optimal cross-section of the fuselage was performed with a view to ensure minimum size of the aircraft on the assumption that 300-350 passengers shall be accommodated in the fuselage in three cabin departments with three main passages.

The purpose of the “Frigate Ecojet” program is to create a globally competitive range of commercial aircrafts, integral performance indicators of which will be 15-20 percent above the level currently achieved by current civil aviation technology.
TsAGI Press Service
+7 (495) 556-40-38
press@tsagi.ru