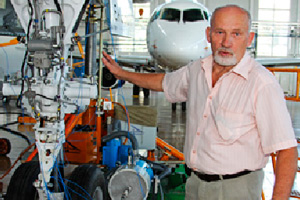 Specialists of the Strength, Load and Aeroelasticity Standards Department of TsAGI completed control frequency testing of the landing gear of the SSJ 100 production aircraft. The work was carried out at the M. M. Gromov Flight Research Institute. This test was preceded by many years of experience in research of dynamic characteristics of aircraft landing gear manufactured by such design bureaus as “Tu”, “IL”, “AN”, “Mig”, “Sukhoi” etc. Resonance (frequency) testing of landing gear increases reliability of evaluation of airplane safety in relation to shimmy — aircraft landing gear wheels oscillations arising due to instability of the linear roll process. This dangerous condition can lead to structural failure of the chassis or its parts. The tests focused on obtaining data on elastic and damping characteristics of the landing gear. These parameters are necessary for the correction of mathematical models of shimmy, stability analysis of wheels rolling during actual use and evaluation of operability of the whole chassis assembly. During tests of free and loaded landing gear, oscillations were excited in structures of different levels, and their response was measured. Unlike traditional methods of similar frequency tests, during these tests sensing devices were used to measure the forces generated by vibration exciters, which enabled detection of the resonance characteristics of the landing gear during torsional, lateral and longitudinal vibrations with the required accuracy. The analysis of the results of these studies confirmed the findings of the certification report on the safety of the landing gear of the SSJ-100 aircraft in terms of shimmy.
TsAGI Press Service
+7 (495) 556-40-38
press@tsagi.ru