“Frigate Ecojet” was tested in takeoff and landing modes 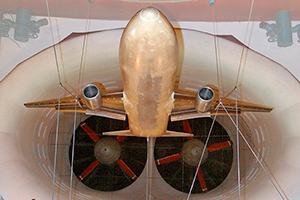 Specialists of the aerodynamics department of TsAGI completed the first series of tests of the model “Frigate Ecojet” aircraft in takeoff and landing modes. The work was ordered by JSC “Russian Aviation Consortium.” The tests were carried out in TsAGI’s subsonic wind tunnel T-102.

The experiment was preceded by the development of high-lift devices using numerical methods of computational aerodynamics.

The completed work confirmed the high level of bearing properties of the wing during takeoff and landing. The experiment also demonstrated the favorable nature of the change of moment characteristics of the model in a wide range of angles of attack and slip with extended and raised high-lift devices, including near the screen, simulating the ground effect.

The data obtained will be used for the generation of a data bank for further design work of the “Frigate Ecojet” aircraft.

The “Frigate Ecojet” project is the Russian development of short- and medium-range widebody aircraft.