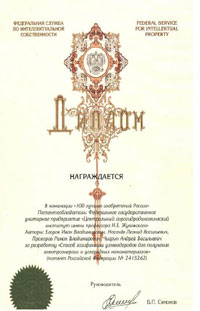 Scientists at TsAGI have created a new method of gasifying hydrocarbons. The new process involves gasifying the hydrocarbons through water electrolysis, which aims to produce electricity and high-quality hydrocarbon nanomaterials, and also permits the separate use of the hydrogen and carbon components in the hydrocarbons. This discovery was one of the 100 best inventions in Russia in 2012. The method proposed by the Institute’s specialists has many advantages. For example, by using this development to extract coal from difficult to recover deposits, it is possible to achieve a 100–200% increase in the safety and profitability of operations. The use of this technology to produce electricity will make it possible to reduce harmful emissions of carbon dioxide and nitrogen oxides to almost zero. And the use of gasification products in fuel elements with high output-to-input ratios (about 90%) will help increase fuel efficiency when generating electricity. In fact, this invention by TsAGI scientists will make it possible to develop new alternative sources of energy that are more energy intensive, economic and environmentally friendly. The new technologies will also make it possible to produce super-strong multifunctional materials from carbon nanocomposites, designed to create a new generation of aviation structures. In addition, this method of gasification may play an important role in the creation of aircraft with electric propulsion units based on hydrogen fuel elements.
TsAGI Press Service
+7 (495) 556-40-38
press@tsagi.ru