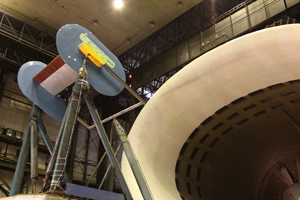 On September 12 and 13 a delegation of scientists from TsAGI took part in the final conference of SADE (SmArt High Lift DEvices for Next Generation Wing) project within the 7th Framework Programme of the European Union and submitted a report on the results of its work. The conference took place in Munich, Germany. At the end of August — early September, TsAGI specialists performed flow tests of a large-scale demonstrator, a wing compartment with an adaptive design slat. During the tests experimental data were obtained required for a comprehensive study of aeroelastic characteristics of the wing slat, namely distribution of pressure, deformation and elastic displacement of slat structure elements in the flow. The experiment was carried out in one of the Europe’s largest wind tunnels, the T-101 tunnel of FSUE TsAGI. Three test cycles were performed: In takeoff, landing and cruising modes. All tests were carried out at angles of attack from −10 ° to +22 ° and with flow rates of 30, 40 and 50 m/s. The results obtained at TsAGI will help create the next generation wing that allows improved aerodynamic performance and fuel efficiency, as well as reducing noise and emissions in all flight modes — especially during takeoff and landing. In early October, the results of tunnel tests will be provided to project partners (DLR, EADS) for detailed analysis of the adaptive design, which will be the final step of TsAGI’s participation in the SADE project. The SADE project of the 7th European Framework Programme started on 1 May 2008. It brings together 13 leading scientific and engineering aviation centres in Europe, including the German Aerospace Centre (Deutschen Zentrums für Luft-und Raumfahrt — DLR), the Airbus company, European Aeronautic Defence and Space Company — EADS and others. The official date of project completion is 31 October 2012. During four years of team work scientists from TsAGI and leading European organizations have managed to create preconditions for improving the perfection and competitiveness of promising aviation equipment.
TsAGI Press Service
+7 (495) 556-40-38
press@tsagi.ru