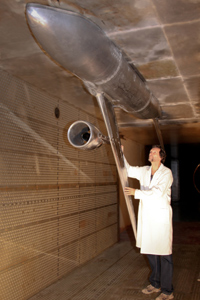 A large-size semi model of the МС-21 aircraft has been subject to a set of tests in TsAGI’s Т-128 transonic wind tunnel. These tests make it possible to more accurately define aerodynamic performance of an aircraft under different operating modes, including take-off and landing. For this effect, the wing design envisaged deviation of the entire take-off and landing configuration.

Along with the development of take-off and landing configuration, researchers from TsAGI studied impact of adverse climatic conditions on wing flow.

The application of large-size semi models is mainly motivated by the intention to maximize linear dimensions of a model for the given test chamber of the wind tunnel. This enables an almost doubling of the Reynolds number — a similar criterion for viscous flows — and thus to bring test conditions closer to reality. The use of large-size semi models in experimental activities also provides for a more accurate modeling of small-size components such as flap fairing, vortex generators on wings and engine nacelles, and etc.