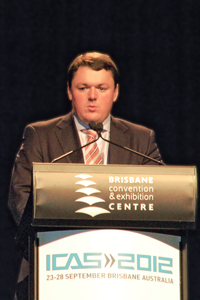 A TsAGI delegation participated in the International Congress ICAS-2012 (International Council on Aeronautical Sciences) that took place on 23–28 September 2012 in Brisbane (Australia).

Twelve sections on aerodynamics, durability, flight and control dynamics, etc. were functioning during the week at the scientific conference of the Congress. Scientists from the Central AeroHydrodynamic Institute presented over 30 papers on various aspects of aviation science.

ICAS Prize awards for aviation experts also took place within the framework of the Congress. An employee of TsAGI, Deputy Head of the Foreign Economic Activity Department of TsAGI Evgeny Andreev, was the winner of John J. Green Award.

ICAS, founded by American engineer and physicist Theodore von Karman in 1957, is one of the most reputable international public scientific organizations. The Council brings together on an equal basis countries, organizations, scientists and experts from around the world for the purpose of promotion of cooperation and exchange of information in aerospace research. Our country has been represented in ICAS since 1973. ICAS Congresses are the world’s largest international aeronautics forums, held every two years since 1958. ICAS-2012 brought together more than 600 participants from 40 countries. Russia, along with the Central AeroHydrodynamic Institute, was represented by the Central Institute of Aviation Motors, the Research Institute of Aircraft Equipment, Samara State University and the Moscow Aviation Institute.

29 International Congress ICAS-2014 will be held at the proposal of the Central AeroHydrodynamic Institute (TsAGI) in St. Petersburg in 2014. This will be the first time that Russia has hosted a prestigious Air and Space Congress of this caliber.
TsAGI Press Service
+7 (495) 556-40-38
press@tsagi.ru