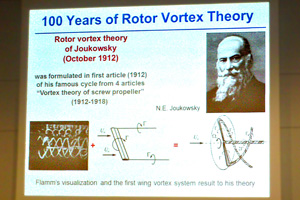 The 100th anniversary of the rotor vortex theory (propelling screw, propeller, wind turbine, etc.), one of the most significant works of the great Russian aerodynamics scientist Nikolay Zhukovsky, is being celebrated this October. The work was published in the first article of the series, “The Vortex Theory of the Propelling Screw” (1912). The screw theory is the most complex and important chapter in aerodynamics. Indeed, the work by Zhukovsky for the first time summarized the results on the flow around individual bodies and wings for rotating objects — blades. The vortex theory allowed an explanation of their working principle: The generation of thrust by a propeller and the generation of torque by a turbine.

The vortex method of calculation proposed by Zhukovsky one hundred years ago is now widely used for the design of rotor blades for different purposes.

A special session of the 4th International Conference, “The Science of Making Torque from Wind” held in Oldenburg, Germany was dedicated to the 100th anniversary of the theory. The conference was attended by over 300 scientists from leading universities in Germany, England, France, Spain, Denmark, etc., united to the European Academy of Wind Energy (EAVE), as well as specialists from energy companies, such as Siemens WP, Hitachi Ltd, Nordex Energy GmbH, DONG energy, Vestas, etc.

According to one of the participants of the conference, an employee of the Institute of Thermophysics of SB RAS (Novosibirsk), Doctor of Science in Physics and Mathematics, Professor V. Okulov, rotor aerodynamics is experiencing a period of vigorous growth due to the rapid development of the wind power industry in Europe. “The legacy of the great Russian scientist today again turns out to be popular, and the vortex theory created by him 100 years ago has once again become the subject of heated discussions at the international forum,” noted Valery Okulov.