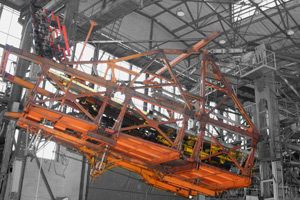 The Central Aerohydrodynamic Institute (TsAGI) is finalizing endurance tests of the IL-96 airplane, the main wide-body aircraft and the flagship of domestic aviation. Tests were conducted on the IL-96-300 aircraft structure with the purpose of implementing increased endurance characteristics of the IL-96-400T modification of this aircraft with a design life of 20,000 flight cycles.

The work was carried out in several stages; in the first stage fatigue tests were conducted. Scientists simulated aircraft operating loading conditions at the stand and confirmed through experiment its double design lifetime, i.e. designed lifetime with a double margin. In the next stage damages of minimum detectable size were inflicted on the test object, after which it was tested within the scope of the third design lifetime. The development of fatigue damage was investigated, from the minimum detectable size to the limit or the critical size.

The endurance test department of TsAGI started the final cycle of work — residual strength tests of the structure. Scientists will have to prove sufficient structural strength in the presence of regulated damages. During this stage maximum operating loads (loads that may be applied once or at most a few times to the aircraft structure over the entire life of the aircraft) are applied to the test object with regulated damages. The work starts with loading the structure to the maximum operating load with natural damages occurring after fatigue tests. Then experts of the Institute will cause regulated-size damages to the structure: A cut on the bottom wing panel through two inter-stringer distances (about 280 mm) and damage to the back spar cap at the adjacent part of the wing panel. Then maximum operating loads will be applied again.

Prior to this crucial testing stage the design analysis is performed, in which the forecast of sufficient bearing capacity of the wing structure with regulated damages shall be obtained. During the tests monitoring will be carried out to identify the pre-failure state in order to prevent the complete destruction of the wing structure.

The whole set of tests will ensure continued and safe operation of the entire fleet of IL-96 aircraft.