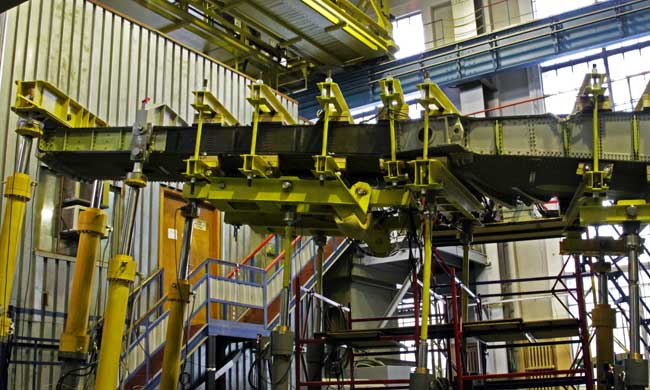 Specialists of the TsAGI Structural Engineering Complex have completed the first stage of endurance tests on the prototype of wing box No. 2 in the composite wing in accordance with the MS-21 program. Operations were carried out as ordered by CJSC AeroComposite within the framework of the development of the advanced MS-21 airplane with a composite wing.

The purpose of the research is to prove non-propagation of operational damages on a composite wing of an aircraft. The tests confirmed that various damages to the wing will not spread and will not impact flight safety.

Prior to endurance tests, artificial impact damages were applied to a prototype of the wing box, which could arise in production and operation. To load the structure, a flight cycle is generated, being equivalent to one in actual operation. At the first stage of endurance tests 7,000 flights were simulated on the bench.

Nowadays the specialists do visual inspection and ultrasonic examination of impact damage areas then the tests continue. Following the results of the entire cycle of tests TsAGI scientists will experimentally evaluate characteristics and properties of the structure, confirm selection of the structural arrangement of the wing box, the actual strength and durability of structure zones will be determined, and the technology of standard repairs and control methods will also be practiced. Test results will be used when designing the wing of the MS-21 aircraft.

Currently there are four prototypes of the MS-21 aircraft composite wing box in TsAGI. All these prototypes manufactured by foreign companies Diamond and Fisher as ordered by CJSC AeroComposite have been undergoing a complex of strength tests in the Institute’s laboratories since the summer of 2011. TsAGI specialists have completed stiffness, frequency and static tests to maximum loads and damage (wing boxes No. 1 and No. 3). Research has been carried out taking into account standard damages in operation. Brackets for suspension of chassis assemblies and the engine have been tested, making it possible to evaluate the strength of metal and composite joints. For the first time the composite wing box was joined and sealed with the center wing section imitator in accordance with standard technology.

TsAGI plans to investigate the influence of climatic factors on the strength of composite structures on the basis of the prototype of wing box No. 4.

The start of tests for the actual wing box of the composite wing of the MS-21 is scheduled for 2015.